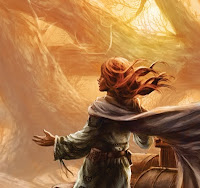 This is the cover for Samiha's Song, second installment of my wife's trilogy " Chronicles of the tree".
I had to make this one as different from the first image as I could, while still keeping it in the "family". The brief was to do the scene where Samiha stands on the top of the damaged dome and sings to the people, calling them to the temple.
It was very tempting to design a cool building and have Samiha facing us. But I thought it might be better to be more "suggestive"and view the whole scene from behind her, as you can see on the black and white rough. This angle would allow me to be less precise with her features so as to leave the imagination to the readers.
The architecture of the town also had to be different from Argos and had to reflect the hierarchy of the city with the rich people buildings on the right, and the shantytown of the poor living in tents on the left.
The only thing I didn't see coming was the fact that the title would end up right where the sun is!
There's a few mistakes here and there in the final image, but I'll just pretend I made them on purpose.
Posted by Frank Victoria at 11:32 PM 6 comments: 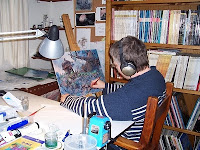 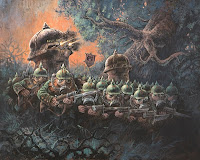 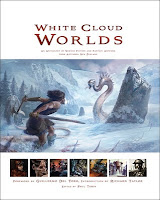 What a weird composition, I hear you say!?!
And that's precisely the point: how far could I push this image before it would look unbalanced.
To get as much movement as possible, I did it in photoshop while listening to heavy metal... maybe I should have drunk some coffee as well?
Posted by Frank Victoria at 4:06 AM 3 comments: 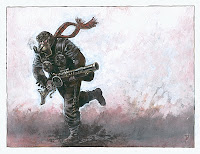 Just a little free painting I did for the Plunket charity. Acrylic paint on paper.
Posted by Frank Victoria at 2:04 PM 4 comments:

This is the final cover for my wife's debut novel... Nepotism? Who said nepotism? I heard you at the back!

Posted by Frank Victoria at 2:54 AM 6 comments:

Just trying my new photoshop. a two and half hour painting....
Posted by Frank Victoria at 4:00 AM 6 comments: 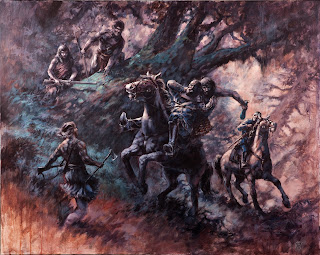 So there it is: "The Ambush part two"
I'm not saying it's finished. I might touch it again at some point... or not.
One thing is for sure: I don't want to kill the energy it has, by adding a million details!

Gif animation
Posted by Frank Victoria at 12:19 AM 7 comments: 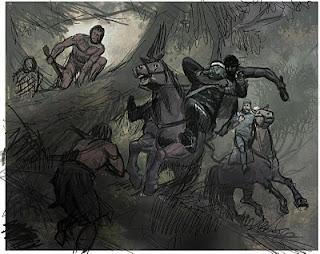 Finally, I found something that I liked, and pushed the sketch a little further.
I took a big canvas ( 80cm by 100cm ), and projected a pencil drawing of that rough onto it.
Posted by Frank Victoria at 12:02 AM No comments: 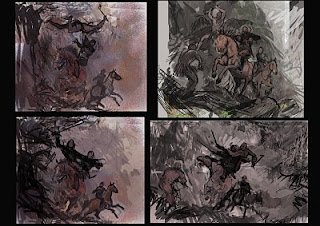 I started by placing elements and playing around with the composition in photoshop.
The whole thing took probably half a second.
No I'm kidding, it took 2 seconds.
Posted by Frank Victoria at 11:51 PM 1 comment: 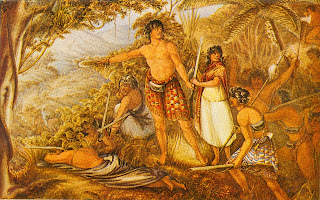 This watercolor entitled " A Maori ambush" was painted in the nineteen century by a colorful character named Gustavus Von Tempsky.
Even though these people were his enemies, we can see the respect he had for the Maori rebels.
For quite a while I've been thinking of doing my own version of that event, by imagining what happens after the scene depicted there.
"The Ambush, part two"
Posted by Frank Victoria at 11:12 PM No comments: